Ever Given Makes the Case for Resilience 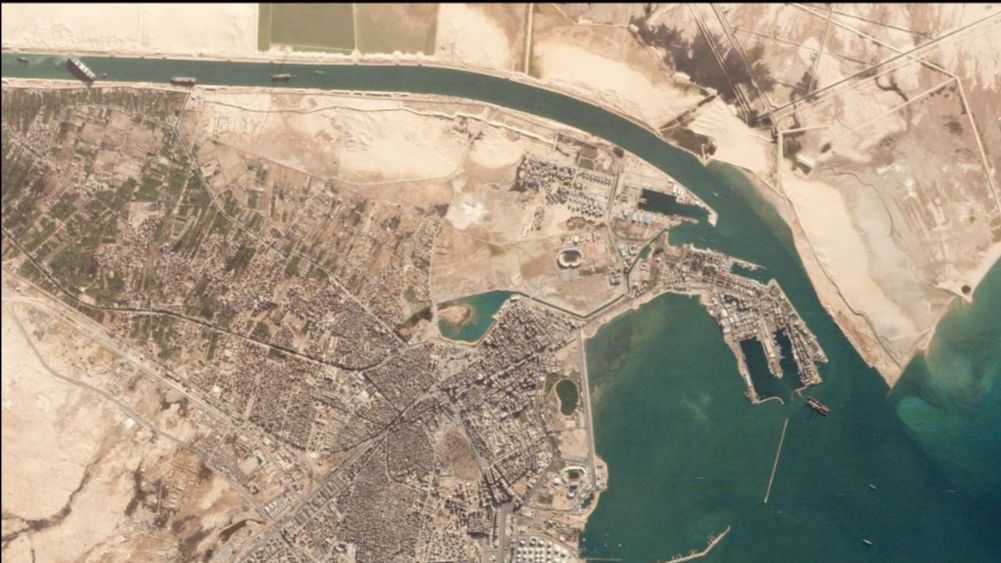 Does Your Supply Chain Need a Second Opinion?

It seems that COVID-19 has succeeded where other disasters had failed. It opened people’s eyes to widespread vulnerabilities within our lean, cost-optimized supply chains. (We’re going to completely bypass the health industry in this piece.) Supply chain objectives have been relatively narrow, commonly geared to reduce costs and improve efficiency. Decades of this globalized practice made this model business as usual. Putting costs and efficiency above all else created supply chains that have been exposed as weak and vulnerable to the unexpected. Like a pandemic. Or Godzilla. Or a megaship blocking a major trade artery indefinitely.

We need resilience in our supply chains.

Let’s Map Out Your Supply Chain

Supply chain mapping is: Drawing the procedures or relationships that form an organization’s business process. So, instead of scrambling last minute to detect the source of a problem, organizations map and monitor their networks beforehand to have much better visibility of their supply chain.

A good supply chain map includes protocols to anticipate and forecast production challenges at a given site or on a given trade lane. Building resilience in the supply chain can mean identifying and investing in alternative production sites and trade routes. The idea is to have these options available in case of any disruption of primary supply chain capacity and/or to supplement the principal routes. Many companies are learning that just focusing on cutting costs wherever possible in the supply chain sacrifices the agility to make changes in a crisis. Duplicating supply sources and routes imposes costs but is valuable for protecting lead times, shipment frequencies, product mix and volumes, inventories and supplier delivery performance.

Many organizations’ knowledge of their supply chain ends at their first tier supplier level. Consequently, supply chain paralysis caused by the lockdowns in China at the outset of the pandemic caught many companies off guard and forced them to learn about the origins of their product. Even companies that had made efforts to diversify production away from China and to escape a growing tariff regime were surprised to discover that despite production having moved to another country, their businesses were as tied to Chinese suppliers as they had ever been. Suppliers in countries like Vietnam, Cambodia and Bangladesh still depended on components and raw materials from 2nd and 3rd tier suppliers based in China. When those Chinese suppliers halted their operations, so too did the strategically ‘diversified’ manufacturing sites.

Manufacturing plants, suppliers, transportation routes, major markets, warehouses and distribution centers are all intertwined and need to be rethought and reexamined for their strategic and practical value.

Recent events like the sudden and lasting global impact of events like the Texas deep freeze on the global petrochemicals sector exposed the risks of concentration of a given sector. Automotive manufacturers already suffering shortages of critical materials ranging from Texan plastics to Taiwanese semiconductors were dealt a blow by the recent fire at the Renesas semiconductor plant in Japan. Months of lost chip production will test the resilience of automotive supply chain networks already forced to limit outputs due to component shortages. World commerce suddenly confronts the reality that business as usual must account for the fact that disruption is not all that unusual.

Many organizations are recognizing the importance of incorporating disruption-related metrics in their supply chain evaluations. This requires greater transparency and cooperation from suppliers to participate in annual mapping efforts and thorough analysis of how the supply chain map needs to be redrawn for a new era. Without geographic diversification, the supply chain is exposed to dangerous and crippling supply and production bottlenecks. The recent shock waves caused by sanctions on products including cotton and rayon thread from the Xinjiang region of China is yet another example of companies being forced to confront the extent of their geographic risk exposure. Calls for ‘reshoring’ or ‘nearshoring’ could provide greater control and supply chain visibility. However, the Texas storms have shown us you can’t build resilience by betting on one region, even if it’s your own backyard. Supply chain concentration exposes companies to the same risk no matter where in the world it occurs.

A thorough supply chain map isn’t easy to create and it is resource-intensive. It is hard enough mapping out your current supply chain let alone discovering how to build in more resilience! Despite the challenge supply chain mapping poses, the value outweighs the cost and time needed to get a clearer picture of your challenges.

When Fukushima was hit by an earthquake, tsunami, and a nuclear failure in 2011, companies around the world in far reaching industries found that their supply chains were materially compromised. When Thailand suffered devastating flooding later that year, even more supply chain gaps were exposed. For many companies, the risk was not anticipated because there was little to no visibility into the origin of the parts and materials that their ‘tier-one’ suppliers depended on. Without alternate suppliers or contingency plans, revenue losses were measured in the billions of dollars.

Was any lesson learned from these localized disasters with global impact? If diversity and redundancy had been incorporated into supply chains as a result of these disasters, companies would be more ready to manage the gaps in supplies and materials. A significant sum must be invested to achieve diversity and redundancy, but the scale of the losses such an investment could prevent should factor into any consideration. Government infrastructure upgrades and repairs(fingers crossed) could go a long way toward creating the capacity to reduce the occurrence of paralyzing commercial bottlenecks.

Supply Chain: Still Made In China

Deteriorating US-China relations and COVID-19 have brought the lack of geographic supply chain diversity into focus. Many have called for a ‘decoupling’. Without the development of efficient trade infrastructure in emerging economies, which includes the know-how of skilled work forces, competent manufacturing networks, as well as physical infrastructure, it may be impossible to shift away from dependency on China in the near future. From cars made in Europe to phones made in Brazil, dependence on manufactured components you can only get in China is the norm. China has built out the physical and human infrastructure to satisfy the West’s consumer demand for decades, China became good at what they do.

With clear and thorough supply mapping (including alternative sites), some companies could decouple from China right now without switching suppliers. How? Roughly 30% of Chinese suppliers have manufacturing sites outside of China. So, a customer could potentially source a manufacturer outside China without the cost and time of qualifying a new supplier.

You can’t escape the fact that China has got the goods. That’s why many analysts advocate for a China + 1 strategy. Decoupling completely from Chinese mainland suppliers may not be economically or strategically viable. However, by developing partnerships with source suppliers in other countries with different manufacturing competencies, a company could build in flexibility and redundancy in their supply chain for key goods. Developing manufacturing hubs outside of China, for example in Latin America, could also lead to the expansion of alternate trade lanes to the US that could reduce logistical bottlenecks that persist between Chinese ports and major import hubs like the ports of Los Angeles and Long Beach.

The operating motto for supply chain managers could shift from ‘just in time’ to ‘just in case’.  One way many companies are now adjusting to this new reality is by building a buffer stock of safety inventory as security against supply disruptions. Container shortages and congestion has forced importers’ hands to put in their import orders months ahead in order to compensate for the unreliability of shipping schedules that is causing inventory risk everywhere.

Alternative Is More Than A Music Genre

Suppliers are obsessed with giving their shipments that SoCal sun kiss as it enters the US. It doesn’t have to be this way! We’ve already talked about the crushing bottlenecks and long delays at the Los Angeles and Long Beach Ports, so instead, we’re going to focus on the other options, especially for shipments destined for the Midwest.

The ports of Northern California, Seattle-Tacoma and Vancouver have capacity and access to Midwest markets, and multiple ports along the Gulf of Mexico like New Orleans and Houston have made huge investments for expansion. Demographic shifts indicate that there will be more consumer demand in Texas and the eastern coastal states. The expansion of the Panama Canal doubled its capacity when it opened in 2016. New Panamax vessels with 14,000 TEU capacity have direct access to the Gulf and the US East Coast and provide an outlet for shippers evading West Coast intermodal congestion. Oh, it also opens access to the east coast of that little known continent, South America. Of course, if you put all your eggs in one canal, you’re not hedging your risk.

Take it to the Bank (Don’t Get Stuck!)

You may have heard that last week the 400-metre-long megaship Ever Given ran aground in the Suez Canal. It remained stuck there, blocking traffic in both directions for weeks in the vital Asia-Europe-US trade artery. Tugboats and dredgers went to work day and night to free the ship as the world watched, inspiring thousands of memes.

One in three containers shipped from Asia cross the canal to reach the US East Coast. 13% of global commerce suddenly had nowhere to go. That is, until the full “Worm moon” showed up. That’s right, a deepening global crisis was resolved by everybody’s favorite celestial event, an unusually high tide. The Ever Given is 1,312 feet long and all it took was an extra 18 inches of water to refloat it and send it on its way

It is estimated that the Ever Given blocked the passage of $400 MILLION worth of goods per hour. Companies scrambled for alternate routes and considered alternate modes of transportation. There were no palatable options. Carriers that re-routed ships around the Cape of Good Hope added two weeks to the voyage and burned more than 800 extra tons of fuel per trip. Not very green and not very profitable.

For some perspective on the alternatives to transiting the Suez Canal, if the 20,000 containers on the Ever Given had to be shipped via air, you would need 2,500 Boeing 747s to carry the cargo. The roughly 400 vessels lined up waiting for passage on either side of the canal at the time the Ever Given was freed might have required a decade’s worth of Boeing’s order book to reach their destination, maybe more. There’s a reason 90% of global commerce moves on the ocean. Geography(and the moon) continues to shape civilization’s destiny.

Now what? Carriers already struggling with schedule reliability will have to manage Ever Given’s aftershocks. On a positive, it appears that the Port of L.A. and Long Beach will avoid the blowback on this one. The US East Coast is another story. Higher rates, increased congestion and/or blank sailings loom on the horizon. Carriers will navigate the fall-out of this disruption as they see fit, and shippers will likely be left shaking their fists at the moon.

Diversity Is Good For You (And Your Business)

However, if resilience and supply chain diversity were baked into global supply chains, these rare occurrences could be more sustainably absorbed by industries that are more prepared and open to alternatives.

If you have any questions, we have an expert team ready to provide answers. All you need to do is contact us.