Chassis Need A Home Too

By CargoTrans September 4, 2019 Blog No Comments
0 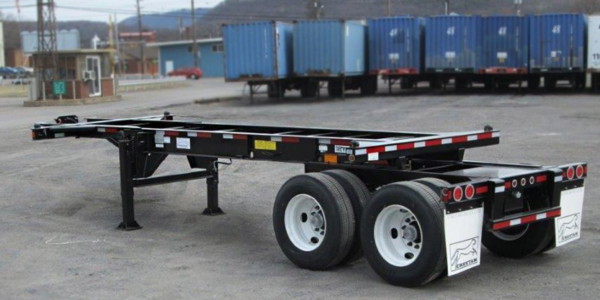 Chassis Need A Home Too

Chassis, the overlooked workhorse of the cargo and shipping industry. Without them, all those shipping containers, full of helpful items and imported materials would languish with nothing but the sight of the sea to ease the pain of their inability to make you money. Which is exactly why we are going to talk about the OG (original gangster) movers and shakers of the industry: the chassis.

There’s no definitive date as to when the modern chassis was invented and there are about forty-eight different definitions for the term. The chassis we are focusing on is the kind that shipping containers are placed on once they are removed from the cargo ship and pulled by a tractor cab. They’ve got cool names like Slider, Gooseneck, Droptank, etc. They are literally what your stock rolls on once they get to the US, but they also cause a few problems.

They cost a lot.

In the past ten years, the industry has gone through a shift in who owns and control fleets of chassis. Starting with Maersk, many shipping carriers ended the practice of owning chassis and providing them for truckers or shippers to use to move containers. This threw a spanner into the works and meant truckers and shippers now had to rent chassis. A cost increase. And wouldn’t you know it, that cost is passed down the line to you, us, all our friends and family and the consumer.

By the by: Maersk didn’t get rid of their chassis. They formed Direct Chassis Link (DCLI) to rent Maersk’s chassis to truckers. What was once an included service now came with a fee. Having increased the value of their chassis fleet they then sold DCLI to Little John Co. for a healthy profit.

Truckers and shippers now have increased costs of renting chassis. In 2009 it was around $11 a day. Ten years later, the rental cost is up to $45 a day. That’s an increase of about 300%. Cool. With a new chassis costing $10,000 to $15,000 per unit these chassis rental companies are getting a full return on investment in less than three years.

They make all the money but they also take up a lot of space when they’re not in use.

Los Angeles and Long Beach ports have thousands of acres of real estate. Some of the most important and highly sought after are the land they use for loading and unloading shipping containers on and off cargo ships. It’s high traffic, and it’s vital that this space is as unobstructed as possible to keep the turn-around times short and at maximum efficiency. Unfortunately, a lot of that space is taken up by chassis waiting to be loaded with a container, attached to a truck and hauled out of there.

It’s argued that dozens of acres of prized land would be better utilized if it weren’t filled with empty chassis. So where do we put them?

Some people in the industry want to change the system and designate “off-dock yards” that house the fleet of chassis when they’re not in use. In doing so, they would free up a ton of space for container handling and streamline the chassis-to-container -to-truck system.

Yes, space would be cleared, but implementing this new system takes time, and there are bound to be hiccups along the way.

The off-dock chassis yards would have to be as easily accessible from any docks in port. If one dock has a faster route to and from the off-dock yard, more chassis will be used at that dock, and the speed of handling would be far greater than other docks that have further to drive and create longer turn-around times. This would in effect cause a hierarchy in docks and carriers or trucking companies may cry foul if their dock suffers from longer transition times.

There is also the issue of who will oversee the logistics of these off-dock yards. For example Long Beach Container Terminal (LBCT) is served by two chassis storage and repair sites. These sites are operated by American Intermodal Management (AIM), and they employ the International Longshore and Warehouse Union (ILWU) labor to service both locations. There is a concern that ILWU will attempt to claim jurisdiction over chassis movements to and from off-dock sites and how that would affect costs, turn-around times and involvement of investors who are not ILWU signatories.

Aside from freeing up space, there would be other benefits too. When chassis are returned they will be inspected. If they are damaged or need adjustments, they would be sorted and handled on the off-dock site. It is estimated that it would also cut the time truck drivers would spend waiting for chassis and loading their containers.

That’s if the chassis is returned to the same port, let alone the same off-dock yard.

Chassis go wherever they are taken. One thing they don’t always do is return. When truckers are directed to haul the container carrying chassis to their distribution warehouses by beneficial cargo owners (BCO), the equipment kind of falls into no-man’s-land. No one knows exactly when a bare chassis will be returned, and a lot of BCOs have financial deals with shipping lines that allow them to hold onto equipment without being charged a late return fee, known as per diem. Where is the justice?! These chassis deserve our respect.

To make matters worse, chassis are rarely returned to where their trips originated. Roughly 50% of chassis that leave Los Angeles/Long Beach are returned to different terminals. This is largely due to shipping lines having to re-position the empty containers mounted on the chassis to different locations. Some have suggested placing mounted sensors on chassis to monitor and track their movements and implementing perks for returning chassis to their original locations or their flashy, new off-dock yards.

The problem of premium real estate being taken up by chassis waiting to be used is not going away. Nor is the issue of making sure chassis are returned to the dock or port they were towed from. Long Beach and Los Angeles ports have around 30,000 empty chassis taking up space. That number is set to increase to over 38,000 during peak season. It’s an issue that needs to be addressed. Finding the right solution will take a lot of brainpower and different bodies coming together.

Please contact our Compliance Team if you have any further questions.